It seemed too trite to write in laudatory terms about the pros, about their surfing. After all, they’re pros, this is the world tour, and there are entire magazines dedicated to covering them. But then again, they’re pros and this is The World Tour and I’m following them. To be professional has always meant to me effortlessness, to make the thing you do, despite the effort and training it takes, appear easy.

It’s Monday, the first day the waves have lined up at Backdoor and the comp is going to run through the day. I am watching intently. Cristina, who hasn’t really been talking to me much, called to say that I should consider coming home, immediately. My father’s lungs have collapsed, his kidneys are failing, and his blood pressure has been dropping. As a doctor, she’s given him 4-5 hours to live, unless things turn around. Not enough time for me to make it home. We decide to talk at 2.

If he, a man I adore not just as a father, but as a human, a mind, a sweet and generous being, looks like his blood pressure is coming back, we’ll reassess then, fly home Wednesday.

So, I am detaching myself as much I can from the mainland. Today, I am, again, some weird type of surf journalist. I have borrowed an owner’s wrist band and I am up in the stands behind the interview booth. Kolohe Andino is being interviewed by Rosie Hodge. While no one would ever accuse Kolohe of being eloquent, at twenty-two, he is poised. He just won his heat. The catalyst for his heat was a nine-point ride in which he made a barrel (tube ride) he shouldn’t have made and appeared to do so easily. The tube ride is the surfer’s equivalent of peekaboo, of a magic trick you don’t find in other sports. In magic, the audience empathizes, no, roots for the rabbit when it disappears and can’t help but cheer when it reappears, alive. I’ve been watching people get barreled or “pitted” since I was ten years old and the only thing that surprises me is that it still surprises me. On the beach at Pipeline the barrel is what the audience has come to see. Yet, for something everyone is expecting, it’s amazing how loud and genuine the wonder and surprise is in the crowd’s cheer. It’s primal. You don’t want the dove to die or get hurt by the magician. The ability to disappear, to be gone behind a falling wall of water—one of our dominant human fears is suffocation, drowning. Watching a surfer throw themselves over an inverted ledge, somehow keep their board in the wave, somehow keep their feet on the board and then tuck under a ten-foot curtain of falling water, thousands upon thousands of pounds of pressure—it makes you hold your breath. There are no surprises when a surfer makes a tube in a video and rarely do those tubes change your pulse. Most fans don’t know how shallow the impact zone is, how small the margin of error. As the wave approaches the reef, it sucks water off of the reef, makes the wave’s lip thicker, more lethal, and, often, can catch the edge of a surfer’s board and suck them up the wave and into the lip detonating on the reef. Last year, Bede Durbige, a perennial pro always somewhere in the top third of surfers on tour, shattered his pelvis. It was doubtful whether he’d walk again. The way the WSL—the entire industry, really—works is, the deeper, longer, more dangerous, and the more unmakeable the tube, the higher the score. You free fall twenty feet into a bottom turn and disappear underneath and behind a lip thick as a house. That’s a ten. 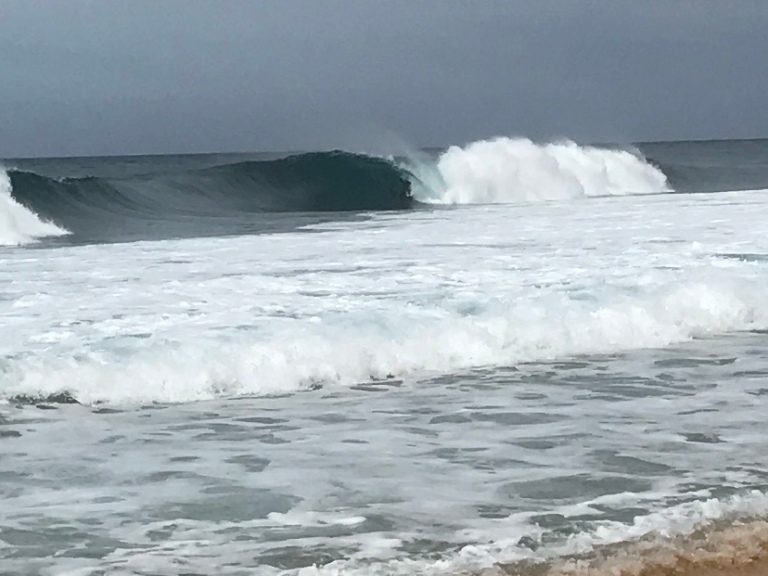 The wave that Kolohe dropped his nine-plus ride on is a wave I would have been comfortable on. Overhead but not particularly menacing. I, like him, probably would have pulled into the barrel. But I would have either tried to go as fast I could to make it back out, or, as that wave started to collapse on itself, with him in the tube, I would have thrown my weight into self preservation and dove out the back of the wave in hopes I wouldn’t get “pinched” and into the reef. Kolohe, by contrast, slowed his board down, “stalled,” and then started roller coastering, pumping up and down “inside” the tube to get speed. When that part of the wave began to shut down, a camera looking inside the barrel shows him adjust his feet and “fight” through the last section, come out with the spit. Kolohe is in his early twenties; he looks slight, the way most of these surfers look slight, but their core strength is phenomenal. Their body fat is almost zero, and they have to have both the strength and lung capacity to sustain thousands of pounds of pressure holding them down, under water, for minutes at a time. On the beach in France one of the judges confessed to me that they cannot see the ways in which John John repositions his feet and makes adjustments on a wave in real time, that what the viewer sees in slow motion and what he does is so subtle and critical, that they would score the surfers higher if they could actually see it. Kolohe makes those same adjustments on his wave in places I would fall.

In the parking lot two nights ago, Adam Melling’s wife said that it is such a stupid sport to judge and make a living from because it is all luck, that you can’t control when the waves show up and who those waves go to. Adam Melling has been on the tour for years, but yesterday he was knocked out of the world’s top 24 and will have to compete on the equivalent of surfing’s D league to try and requalify. I disagreed with her. I said in any lineup, the best surfers always seem to get the majority of the best waves. She shook her head “no” and I replied, “What about Kelly?’ For eleven years, he has seemed to catch that wave. “He’s not human,” she says and I laugh. But she doesn’t. She continues, “Seriously, that guy has special powers.” Adam Melling—all of these pros—on shore may appear small and nondescript. But in the water, to me, they all appear to have special powers. And I’m trying to soak them in.

My wife just called. My Dad’s blood pressure appears to be coming back. Kelly’s warming up in front of me. His heat’s about to start.

This is a text widget. The Text Widget allows you to add text or HTML to your sidebar. You can use a text widget to display text, links, images, HTML, or a combination of these. Edit them in the Widget section of the Customizer.
%d bloggers like this: